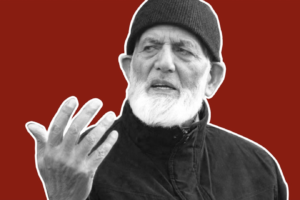 Kashmiri independence leader Syed Ali Geelani was invited by students at Kashmir University to attend a book fair today. Indian officials of the ‘world’s largest democracy’ refused him permission to leave the house. He has been under house arrest most of the time since 2010.

This is not one of those things that might fit under the title “banality of evil.” India pulled his passport for accusations of “anti-India” activities & the US denied him a visa for cancer treatment because he criticized the Iraq War.

One may not have full agreement with his politics, but Syed Ali Geelani is only being isolated because of his unflinching commitment to self-determination for Kashmir.