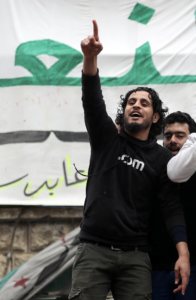 Just who are we to believe in the propaganda war against the Syrian Arab Spring? The Assad regime & its stable of Leni Riefenstahl wannabes who claim Syria, Russia, & Iran are only engaged in bombing & killing “al-Qaeda Salafi-jihadi terrorists”? Or thousands of Syrian civilians, many internally displaced or in diaspora, protesting against the bombing of civilians & demanding the ouster of the Assad dictatorship?

Assadists & their guppies claim (& one of them dared claim on my wall) that Abdul Baset al-Sarout ‘cut off the head of a Palestinian child & took a photo & video celebrating it; that the child begged him to shoot him rather than cut his head off but al-Sarout & his friends insisted on beheading’. But thousands of Syrians in diaspora & those protesting the bombing in Idlib, Hama, & Aleppo are coming out in the streets while Syrian & Russian bombs rain down to honor the contributions of Abdul Baset al-Sarout to the Arab Spring against the Assad dictatorship. Only the politically corrupt would listen to the deranged vituperations of propagandists over the voices of the oppressed.

We honor Abdul Baset al-Sarout. May he Rest In Peace.