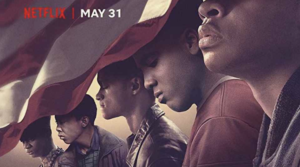 Netflix is showing “When They See Us,” a film about the five young Harlem boys dubbed the ‘Central Park Five’ who were framed by the NYC police & prosecutor Linda Fairstein for the 1989 brutal rape & assault of 28-year-old Trisha Meili. Raymond Santana, Kevin Richardson, Antron McCray, Yusef Salaam & Korey Wise were between the ages of 14 & 16 when they were charged. Despite the lack of physical evidence tying them to the crime, they were coerced into false confessions (which were inconsistent with each other) after deprivation of food, drink, & sleep for over 24 hours

Trump entered the case by taking out a full-page ad calling for the death penalty to be reinstated in New York state so it could be imposed on the five boys. He continues to insist on their guilt even after the 2002 confession of serial rapist & murderer Matias Reyes whose DNA matched the attack on Trisha Meili. Linda Fairstein went on to prominence as a television authority on sex crime prosecution & as a successful crime novelist. The Netflix film has ignited a campaign of retribution against her so that her publisher has dropped her & she is being forced to resign from prestigious trustee positions. It’s not clear why she should not be subject to prosecution.

The film series is very powerful, especially in the depiction of the problems faced by Raymond Santana, the only Latino defendant, on returning home after prison. But it is especially wrenching in portraying the experience of Korey Wise who as a teenager was sent to Attica prison, a maximum security prison for adults, where he faced harassment, assault, & rape & chose solitary confinement just to protect himself. Trump, Fairstein, & the police detectives who framed the boys are responsible for the heinous & racist crimes committed against them but as sociopaths are incapable of feeling guilt or remorse. Korey Wise’s experience in prison stands as an indictment of the entire US prison system, the racism of that system, & of the frivolous popular treatment of prison rape. The $41 million they received in litigation from NYC is chump change for the hell the city put them through.

All the boys are in their forties now & have gone on to rebuilding their lives. Four of them live outside NYC but Korey Wise remains there & has used his lawsuit money to create a foundation for those falsely accused.

(Photo is poster of “When They See Us”)