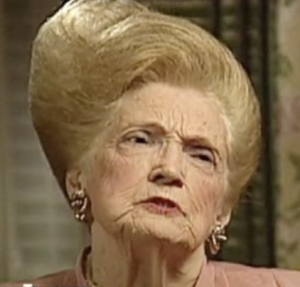 Trump apparently came by his sycophancy to Betty Windsor & feudalism quite naturally. His Scottish mother Mary was a rabid monarchist who after moving to the US married Fred, a member of the KKK who marched around in bed sheets pretending he was superior to Blacks who are so much better looking than ill-favored Fred could ever hope to be even with prosthetics or cosmetic surgery. Mary’s hair style was an architectural monstrosity of backcombing that was simply au courant in the early 1960s for older women. Once created, they became petrified by hair spray & could not be altered until death. This almost certainly led to brain damage for poor Mary plus unhygienic infestations of small critters that attached themselves to her brain stem. This would explain her politics, her choice of husband, & the unfortunate lunk that is her son. It also explains his hair style & his stinking rotten politics. Though he hasn’t got infestations to deal with, he most certainly suffers brain damage.