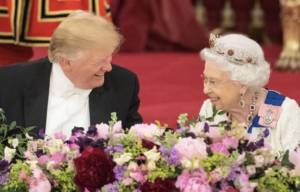 Trump’s visit with Betty Windsor is a cornucopia of follies with both having personal entourages of troll-like creatures, including Ivanka, Jared Kushner, Kellyanne Conway, Sarah Huckabee Sanders, Theresa May, Camilla & Charles who she had to drag from the race track to meet the fart-faced POTUS. Judging from photos of the state banquet (which Betty closed down several schools to bankroll), Trump & Betty delighted in each other’s company, as one would expect from two utterly vapid & detestable sponges.

There was some concern that Trump’s vulgar & lumpen manners would offend the ostentations of an aristocracy now 400 years past its historic prime & stinking like a corpse. But since Phil Windsor, the epitome of vulgar (though in a more aristocratic than lumpen way), was holed up in the palace so as not to be outdone in abusive non sequiturs by Trump, the POTUS merely filled his social function of amusing Betty & the other lowbrow aristocrats with flatulent idiocies, flattery, & shameless groveling.

Great wealth has not made the Trump entourage less vulgar but on the contrary has lit up their follies & pretensions in technicolor for the whole world to deplore. Trump has only been in England for a day & was so overawed & obsequious to feudalism that he hasn’t had a chance to create a major rupture in international relations which we sincerely hope he gets around to. Give him time. There’s still two days left. Hopefully before he & his goose-stepping entourage get back on the plane to DC, he will have moved from groveling to farting obscenities that will bring down NATO.