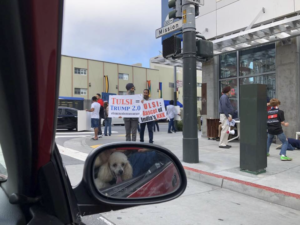 It’s understandable that most Assad supporters are all rah-rah for Tulsi Gabbard because her politics reflect the ignorance & disorientation of many of them & the political corruption of most of them. These Sikhs protesting yesterday in San Francisco don’t fall for her demagoguery but identify her as “Trump 2.0” & as “the mascot of India’s KKK.”

Like Assadists, Gabbard talks antiwar while she supports the Assad dictatorship & Syrian & Russian bombing of civilians in Syria; supports Modi & Hindutva nationalism, which includes the military occupation of Kashmir; supports the repressive military regime of General Sisi in Egypt; supports the military state of Israel; is rabidly Islamophobic, which is the ideology of the ‘war on terror’ to justify several wars, genocide against the Rohingya & Uyghur, & countless pogroms; & she is anti-Semitic toward Jews. That glaring contradiction between her antiwar rhetoric & her support for militarism in all its manifestations is not just demagoguery but a feature of extreme right-wing, even fascist politics.

It doesn’t take an exegesist pouring through her speeches to get to the bottom of her nationalism & white supremacy. It’s written all over everything she says, every political association she seeks (including with Trump), every opportunist rewriting she does of her own political history. It isn’t that Assadists don’t see her hateful politics but that they agree with them.