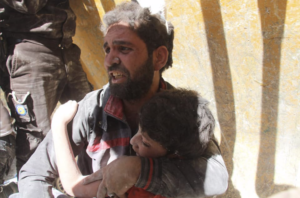 Given their explanation for the war in Syria as a “US regime-change operation,” you would think Assadists would be all over the Amnesty & Airwars report on US savageries in Raqqa titled “Rhetoric versus Reality: How the ‘most precise air campaign in history’ left Raqqa the most destroyed city in modern times.” But they’re so busy vilifying civilians in Idlib & Hama as ‘jihadi terrorists’, denouncing the White Helmets as organ traffickers, & glorifying the murderous feats of the Syrian Army that they haven’t said a peep about the report. Fact is, they haven’t said a peep about how that US regime-change thing is working out in Syria for the entire duration of the counterrevolution against the Syrian Arab Spring uprising. That’s because, under scrutiny, it doesn’t make any sense at all.

Maybe Assadists haven’t mentioned the Amnesty report because they don’t want to legitimize an organization that Bartlett & Beeley placed on their enemy list long ago for criticizing Syrian & Russian government savagery against civilians in Syria. Amnesty does have problems, serious political problems, as we know from its reports on Gaza & ARSA, among others. But that doesn’t make all their work fraudulent or dishonest & much of it remains invaluable. One has to know how to vet media reports or investigations like this. But since Assadists denounce everything & everyone who criticizes their favorite dictator, they won’t touch this Amnesty report with a ten-foot pole even though it is about the US military role in Syria.

(Photo from Syrian & Russian bombing siege of Idlib, Hama, & Aleppo, May 2019, from the White Helmets)