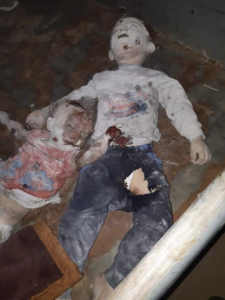 Ordinarily, I am loathe to post gruesome death photos, especially those of children. But to counter the lack of media reporting from Idlib & Hama about the murderous siege by Syrian & Russian bombers & to counter the characterization by Assadists of those being bombed as ‘jihadi terrorists,’ it is necessary to show who actually are being bombed to death by Syrian & Russian bombers.

These small children were killed today in a helicopter barrel bomb attack on the town of Bara. Can any Assadists explain to us which terrorist cell they belonged to?