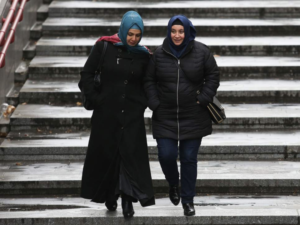 The French Senate just voted to ban mothers who wear Islamic headscarves from accompanying children on school trips. The first French ban on the hijab in schools was enacted in 2004 & women & girls wearing them have since been routinely suspended from schools & colleges. What’s with the sick obsession with the hijab?

A French man who was an automobile engineer introduced the bikini bathing suit in 1946, naming it after the Bikini Atoll in the Pacific Ocean where the US had just done nuclear weapons testing. There’s a cognitive rupture there that’s not easy to explain. At no time has the French government made any moves to outlaw the bikini despite it being at odds with the social standards of modesty which prevailed at the time. Can the French government explain why it thinks near-nudity is the preferred attire for women & any sign of modesty a matter to outlaw? Does lechery play any part in their determinations? Why the hell does the French Senate give a rat’s ass about what Muslim women wear when it has never tried to outlaw the attire of French Catholic nuns who are notorious for flying buttresses called cornettes as their headgear? Why is the French Senate acting like halfwits when the mayor in southern France still hasn’t recovered his dignity from trying to ban Muslim women from wearing tankinis on public beaches? It’s called Islamophobia which directs its propaganda against Islam at women to make Muslim men seem oppressive & Muslim women submissive. It’s long since time we took to the streets to end this oppressive nonsense. It isn’t just a Muslim issue but a feminist one.