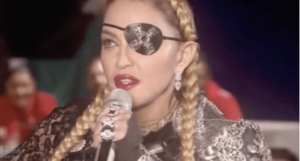 A reliable source reports that Madonna’s performance at Eurovision stunk. Off-key & pretentious. Even more than usual. BBC, which is promoting the event, says she braved a bomb attack threat to perform but if they were honest they’d report that it was her performance that blew up & landed with a thud. She may have done more for BDS by performing since Israel is now forced to draw on the dregs politically & artistically.