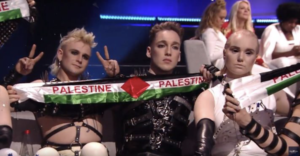 The Icelandic band Hatari ignored the Palestinian call for a cultural boycott of Israel & performed at Eurovision 2019. They thought to redeem their betrayal of Palestinians by holding up Free Palestine banners but that’s called playing both sides of the street, trying to further their own career while compromising with apartheid. They do not deserve accolades for this empty gesture with the banners but are more worthy of a Bronx cheer because they crossed the BDS picket line. (A Bronx cheer is derision & contempt expressed by making a vulgar sound through puckered lips.) The guys are young. So what? That’s no excuse at all since many prevailed on them to honor the boycott & they are familiar with Israeli apartheid, occupation, genocide against Palestinians. The Palestinians getting shot at, bombed, losing limbs, protesting for their lives are young too & they’re the ones who asked Hatari to honor the boycott. Too bad Hatari tried to have it both ways since they end up the losers.

(Photo of the dumb asses at Eurovision from BBC)