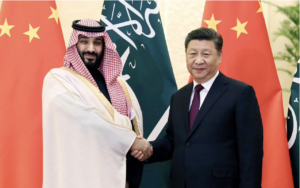 In what only appears to be an irony, Assadists denounce the Syrian Arab Spring uprising as ‘Saudi Wahhabi terrorism’ but agree with Mohammed bin Salman who told China they have a right to persecute & put Uyghur Muslims in concentration camps. What is politically consistent is Assadist support for the persecution & genocide of Muslims or at least their complete adherence to ‘war on terror’ ideology.