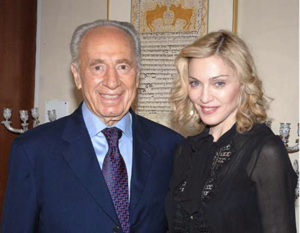 No final word yet on whether Madonna will honor BDS by not performing at Eurovision 2019 which begins on the 14th. No one should hold their breath since she once gushed to Shimon Peres that she was “in love with Israel.” That was after Israel’s 2008-2009 murderous bombing campaign over Gaza but before its 2012 & 2014 bombing onslaughts of which she is certainly aware because BDS activists have made her so. That she is even considering a performance at Eurovision speaks to her venality.

Her 2012 “Concert for Peace” in Tel Aviv featured blood splattered on a giant video screen, Nazi insignia, & an AK-47 pointed at the audience. She told the cheering audience, from which Palestinians were excluded, that “You can’t be a fan of mine & not want peace in the world. People of all walks of life, we’re all sons & daughters of the universe & human beings. We all bleed the same color. We all want to love & be loved. It’s easy to say, ‘I want peace,’ it’s another thing to do it. … No conflict can ever be resolved by causing pain to another human being.” Come again, Madonna!? The unfortunate woman is committed to provocation but Nazi insignia is completely inappropriate as demeaning to the millions who died in the holocaust & to Palestinians who are being subjected to colonialism, apartheid, & genocide by an army stuffing AK-47s in their faces & bombing them to smithereens.

Madonna has a chance this time to do the right thing, to act on that “sons & daughters of the universe” thing she espouses. Let’s hope she chooses justice.

(Photo is Madonna with Shimon Peres in 2007 when she visited Israel for a Kabbalah event & had a private meeting with Peres.)