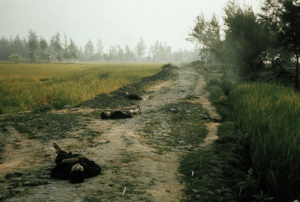 Trump’s pardon of US Army Lt. Michael Behenna for the war crime of stripping, interrogating, & executing Iraqi Ali Mansur Mohamed in 2008 is not a new low point in US military justice. It’s the way war crimes are handled by the US government, if they’re prosecuted at all & most of them certainly are not. Keep in mind that the US spends considerable effort, especially in Iraq & Afghanistan, forcing even puppet regimes to negotiate security agreements giving US soldiers immunity for war crimes. (It’s similar to India’s Armed Forces Special Powers Act giving Indian soldiers in Kashmir immunity from prosecution for war crimes.)

A military court originally sentenced Behenna to 25 years but that was reduced to 15 & he was released after five. It’s a surprise he served any time at all. In 1971, a military court sentenced Lt. William Calley to life in prison for the mass murder of over 500 Vietnamese men, women, & children at the 1968 My Lai massacre. The military tried for two years to cover it up but because of the persistence of the helicopter crew which intervened to stop the massacre, it was eventually made public. Calley ended up serving three years under house arrest when then-president Nixon reduced his sentence. In 2013, Sgt. Robert Bales was sentenced by a military court to life in prison without the possibility of parole for the 2012 massacre of 16 Afghan civilians. He remains in jail but it is only a matter of time before his sentence is also commuted. If the US prosecutes & punishes soldiers for war crimes, fewer would be willing to carry out their duties during war.

What came out from the My Lai massacre investigation is that war crimes are the very nature of wars & not at all a rare occurrence. Seymour Hersh, then a NY Times journalist, became a celebrity for breaking the story but it was primarily the tenacious, outraged helicopter crew who got it publicized & prosecuted. Hersh toured the campuses & had to be repeatedly corrected by antiwar activists for blaming the massacre on the psychological derangement of Lt. Calley, completely leaving out the culpability of the US government for conducting the war in the first place.

(Photo of My Lai massacre by Ronald S. Haeberle)