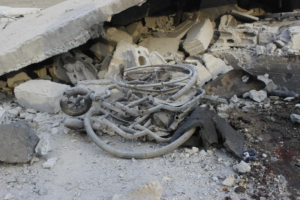 Syrian warplanes dropping barrel bombs & flanked by their Russian counterparts are escalating a murderous bombing campaign over Idlib province, causing 150,000 civilians to flee for their lives but with nowhere to go. The regime is using the same military tactic it employed in Aleppo of systematically destroying hospitals & medical centers. Most hospitals & schools are of course forced to suspend operations. Assad propagandists Eva Bartlett & Vanessa Beeley report this as “the Syrian Arab Army gathers to cleanse Idlib & Hama of international terrorists.”

There is no hope at this point for those who do not see ‘war on terror’ rhetoric written all over Assadist propaganda. There is no hope for those who justify bombing civilians in order to save a tyrannical regime. The alliance between fascists, libertarians, Stalinists, & erstwhile socialists which justifies apocalypse in Syria has reached the end of the road.

This photo is a wheelchair amid the rubble of Kafranbel hospital in Idlib province which was destroyed by Syrian & Russian bombing.