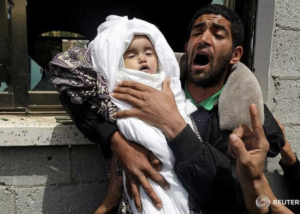 The Israeli military reported that 600 rockets fired from Gaza provoked Israel to bomb Gaza to smithereens & media reports that in banner headlines like it’s the gospel truth when they know it’s a pack of damn lies. Can they show us any credible forensics from where those rockets dropped? Can they explain why the Iron Dome antimissile system bankrolled by US taxpayers failed to intercept any of those 600 rockets from Gaza? That system costs $100 million for each battery (Israel currently has ten) & it costs about $80,000 to intercept each rocket. Is the US paying for a white elephant system that doesn’t work? When did it stop working since media routinely reports that the Iron Dome system efficiently protects Israel from massive damage & casualties? Does it only not work when Israel has to justify a genocidal bombing campaign over Gaza?

Why have there been no banner headlines over the past year as Israel has combined bombing sorties over Gaza with snipers using live ammunition against unarmed protesters at the weekly Great Return March? In the past year of protests, almost 300 Palestinians, including kids, medics, & journalists, have been shot at & killed & over 30,000 have sustained injuries often requiring amputation. Gaza is being made a land of one-legged men because of Israeli snipers. Any reputable news agency would be covering that story of genocide & shouting indignation from the rooftops in banner headlines. That they don’t even report it is how you know that concerning Israel media has become an agency of propaganda rather than news.

Israel claims four civilians were killed by rockets that the white elephant Iron Dome system did not manage to intercept. We’d like to see some credible documentation that they were killed by rockets from Gaza & not from some other cause. Palestinians are burying 25 people, including a 4-month-old girl, 14-month old girl, a 12-year-old boy, & two pregnant women in addition to the four young people that Israeli snipers killed on Friday at the Great Return March. Media is reporting that many of those killed were “Hamas militants” but there’s no way in hell they could know that since it’s unlikely Gaza health officials would identify those killed by their political status.

Media can lie through its ass but the truth is known even by ardent supporters of Israel. The question is “which side are you on”? That of justice or that of genocide?

The photo is baby Saba & her father. She was killed last night by an Israeli airstrike.