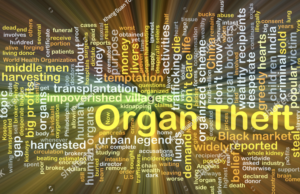 One should be highly skeptical about the constantly circulating reports that Israel routinely engages in organ harvesting of Palestinians. The entire system of organ trafficking–including traffickers, brokers, health professionals, recipients, suppliers–is mired in criminality & inequality, with the poor & marginalized subject to forcible removal or compelled by poverty to relinquish their internal organs for wealthy recipients. Israel plays a major role in the international organ trade (legal & illegal), along with India, the Philippines, Pakistan, Costa Rica, Colombia, Vietnam, Japan, Lebanon, Egypt, South Africa, Kosovo, Ecuador, Panama, China, Turkey Azerbaijan, Cyprus, Russia, & the US. This is a global problem reaching from Asia to Southeast Asia to Africa to Latin America to Europe to the US & is not specific to Zionist colonial policies against Palestinians.

Israel is involved up to its eyeballs in illegal & criminal organ trafficking so it would be surprising if Palestinians were not among their victims. Haaretz has often addressed the issue from the point of view of bioethics since even legal organ trafficking involves considerable issues of morality. But anti-Semites promenading as anti-Zionists reveal a deplorable lack of investigative integrity when they base their allegations against Israel on an August 2009 article in the Swedish tabloid Aftonbladet by a writer named Donald Boström. The article claimed without a shred of evidence that Israeli soldiers harvested organs from dead Palestinians. It isn’t just highly unlikely but ludicrous to claim that soldiers untrained in medical procedures would remove kidneys or other organs from Palestinians that they just executed. By its own admission, Israeli forensic pathologists harvested organs from dead bodies, including Israeli soldiers, Israeli Jews, immigrant workers, & Palestinians, without the permission of their families. But, as in other countries, a spotlight on the grotesque nature of organ trafficking caused Israel to make laws governing its practices. Given the criminality involved in organ harvesting, it is certainly conceivable that Israel continues to harvest organs of Palestinians but one cannot make such allegations without irrefutable documentation.

Following the 2009 article in Aftonbladet, others formed a chorus denouncing Israel for organ harvesting Palestinians so that it is now accepted fact. The chorus includes Assadist Stephen Lendman who never met a conspiracy–from 9/11 to the war in Syria–that he didn’t think Mossad & Zionists weren’t behind; Alison Weir from If Americans Knew who ran with the allegations in Aftonbladet without even the semblance of investigation. Weir is a regular attendee at the Iran conference of fascists, holocaust deniers, other anti-Semites, 9/11 truthers & other conspiracy whack jobs so she may have an inability to distinguish fact from hate mongering. State Russian media RT also joined the chorus denouncing Israeli organ harvesting of Palestinians but since they regularly report that White Helmet rescue workers are terrorists engaged in organ trafficking, they are hardly a reputable source.

The struggle against Israeli colonialism & apartheid does not require fabrications or invention of atrocities. The facts of genocide against Palestinians speak loudly enough.