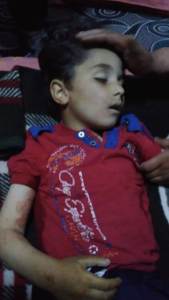 If you just can’t figure out who is telling the truth about the White Helmets in Syria–whether it’s Russian diplomats & Vanessa Beeley who claim they are terrorists engaged in organ trafficking, or the White Helmets themselves–there’s an easy way to judge: Russia is bombing civilians in Syria & Beeley supports this safely from studios on European media while the White Helmets are risking their lives to pull civilians out of rubble caused by the bombing.

This is little Mohammed Ghanoum who was killed today when Syrian cluster bombs targeted civilian homes in the outskirts of Kafranbel City in the Idlib countryside. May he Rest In Peace.