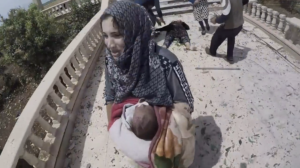 Russian militias backed by Syrian & Russian bombers have increased bombardment of civilian communities in Idlib, Hama, & Aleppo. Syria is reportedly using cluster bombs which release hundreds of explosives & are banned by 102 countries because they indiscriminately harm civilians. The US & Russia also use them.