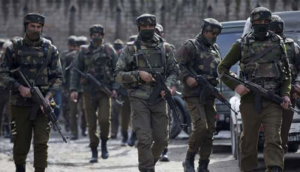 According to the Jammu & Kashmir Coalition of Civil Society (JKCCS), almost 600 Kashmiris were killed by Indian occupying forces in 2018 making it Kashmir’s ‘deadliest year’ in a decade. One of those killed was an 8-month old baby. It is often referred to as a ‘low-intensity armed conflict’, a concept devised by US war strategists in the 1980s to describe US military aggression of a paramilitary nature in Central America. An occupation of nearly a million troops, the use of pellet munitions, & that kind of death rate can hardly be called low-intensity.

Do these Indian soldiers in Kashmir look ‘low-intensity’ to you?

(Photo from The News)