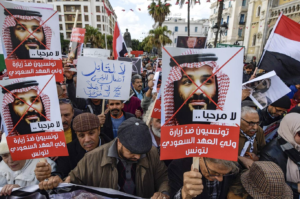 After confessions extracted through torture, Saudi Arabia beheaded 37 men on Tuesday in different parts of the country for various alleged crimes which according to the official Saudi news agency included: “adoption of terrorist & extremist thinking, forming terrorism cells to sow corruption & disrupt security, spread chaos, incite sectarian discord, harm peace & social security, & attack police centers using explosive bombs.” One of the men’s bodies along with his severed head was publicly displayed on a pole, crucifixion-style. Including these executions, Saudi Arabia has carried out over 104 executions so far in 2019, including 40 people who committed drug offenses. It is presently engaged in rounding up women’s rights advocates for incarceration, kangaroo trial, & execution.

Trump remained dumb as a stump after the Saudi beheading & dismemberment of Jamal Khashoggi in October 2018 & has not expressed even a ceremonial protest to these 37 executions. But since the US is engaged in several bombing wars, no one could take any such protest seriously. Cutting people’s heads off with swords for taking drugs, thinking rebellious thoughts, or protesting has not interfered with the cordial reception MBS has received from world leaders, including high-fiving Putin at the G-20 conference last December. After all the criticism the Saudi government is receiving from human rights activists for the executions, one wonders if Code Pink or other US ‘antiwar’ groups will be sending a ‘peace delegation’ to express solidarity with the regime as they did to North Korea, Iran, Venezuela, Syria.

This photo is a protest in Tunisia in November 2018 after the beheading of Khashoggi & before MBS was cordially received by government heads at the G-20 conference in Argentina in December. He was paying a state visit to Tunisia but was greeted by hundreds of protesters against the Saudi bombing of Yemen & the execution of political prisoners.