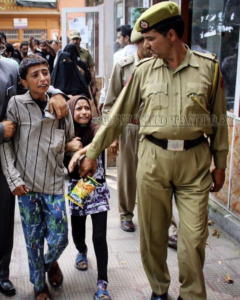 Kashmiri Faizan Bashir, then 12-years-old, being arrested in 2012 for ‘waging war against the state’ of India, rioting, & for attempted murder. He was eventually released. That was under the tenure of chief minister Omar Abdullah who introduced pellet guns against unarmed protesters & is now playing champion of the people.