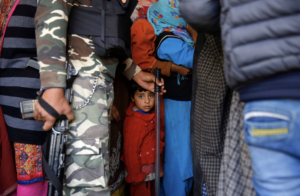 Kashmir, which almost never appears in photojournalism–even during the uprising & pellet gun onslaught in 2016-17– is a frequent subject these days during India’s prolonged election procedures. (They began on April 11th, will be conducted in seven phases, & the results will be announced on May 23rd.) Most of the photos show long lines at polling stations when in fact Jammu & Kashmir have the worst voter turnout percentages of any state in India. In Srinagar, the percentage has been close to ten-percent of eligible voters since 1999 & those are probably government officials & their flunkeys. The low turnout is interpreted as a complete rejection of India, not just the occupation.

This is one of the photos which shows the voter queue at a polling station in Mujgund on the outskirts of Srinagar.