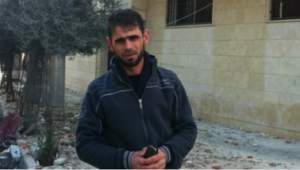 Reporters Without Borders (RSF) is calling for an accounting of the disappearances & deaths in Assad’s gulag of Ali Mahmoud Othman & other journalists. Syria ranks as one of the most dangerous countries on RSF’s annual World Press Freedom Index: 174 out of 180. Meanwhile Assad propagandists like Bartlett & Beeley & pro-Assad journalists like Robert Fisk travel freely in Syria embedded up the ass of the Syrian Army.