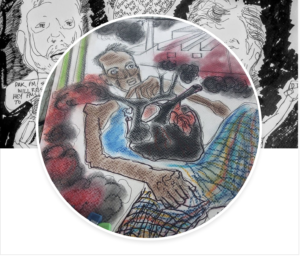 This artwork by Dhrupadi Noor portrays an Indian coal miner suffering from black lung disease which is a gruesome affliction. Primarily that is because young mine workers are not provided safety gear or masks. How many generations has it been since doctors first identified black lung disease? It was diagnosed as far back as 1822–nearly 200 years! Black lung disease is caused by inhaling coal dust; it is debilitating, often fatal, & there is no cure. According to substantial data, people in coal mining communities have increased risk for many chronic illnesses, skin disease, kidney disease, chronic obstructive pulmonary disease (COPD), emphysema (that means they can’t breath), fibrosis & necrosis of lung tissue, high blood pressure, high mortality rates. All these health threats to people with little access to health care, eating inadequate diets, & living in poor housing conditions!

This isn’t just a problem with coal mine operations in India but among coal miners all over the world & the reckless disregard for their lives is getting worse. In the US, black lung disease kills over 1,000 coal miners a year (76,000 since 1968); in China it kills over 6,000 miners a year. In India, there is a 40-percent increase in miner deaths across the country from explosions, accidents, & mine collapses but there is no public accounting of the hundreds of young workers afflicted with black lung disease. All of these figures are probably underestimates.

Black lung cases in the US have more than doubled in the past 15 years because safety laws have been strip mined in the interests of increasing production. Coal mining isn’t just dirty energy; it’s dirty business all around when you subject millions of young workers to health problems & premature death. Wielding the scientific data as a weapon, unions need to do their job & mobilize their ranks to insure safety protections are a first priority. Keep in mind, in 2012 the coal operators in India got a $34 billion windfall from the Indian government when it allocated licenses without auctioning them. So they’re rolling in dough & more than able to provide young workers with safety gear.