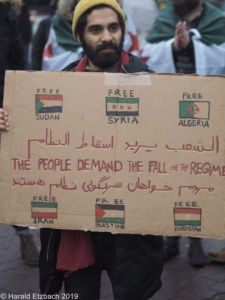 When Sudanese dictator al-Bashir paid a state visit to Assad in December 2018, it was to render solidarity with the counterrevolution against the Syrian Arab Spring. Understanding the character of the counterrevolution in Syria, Sudanese protesters have fully rendered solidarity to the Arab Spring. Now, in a maneuver modeled on the military ouster of Egypt’s Morsi, the Sudanese military has ousted al-Bashir & taken power in order to salvage capitalism & prevent the popular uprising from pressing forward to revolutionary transformation.

A military dictatorship modeled on General Sisi in Egypt is decidedly not what the Sudanese movement had in mind & they continue to protest demanding a civilian transition government.

The power & importance of the Sudanese revolution identifying with the Syrian Arab Spring cannot be overstated. In one momentous stroke, it puts the lie to Assad propagandists & their guppies & reduces the political stature of commentators who support Assad, like Tariq Ali, Noam Chomsky, Robert Fisk, John Pilger, Chris Hedges, to lapdogs of dictatorship.