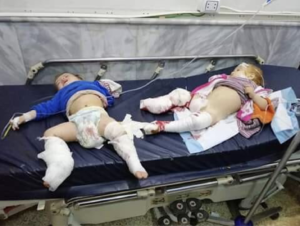 These are two of the three children injured yesterday by a cluster bomb explosion from Russian & Syrian bombing of civilians in the countryside city of Hreitan near Aleppo. Syrian authorities have not yet identified which terrorist group they belong to.