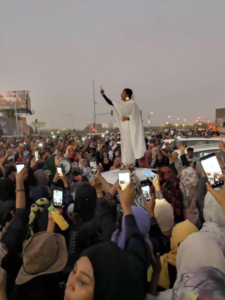 Sudan’s revolution, standing up unafraid in strength and courage. Beautiful!

Protestors continued their sit-in in at army headquarters for the 3rd day today, following months of protests calling for Sudan’s leader Bashir to step down and pave the way for democratic elections.

Just days ago, Algerians forced their leader to resign after decades in office, and Sudanese are hoping for the same.

Algiers and Khartoum, leading the new wave of Arab revolt.

Hind Makki explains the symbolism of the woman in the viral photograph.

“She’s wearing a white tobe (outer garment) and gold moon earrings. The white tobe is worn by working women in offices and can be linked w/cotton (a major export of Sudan), so it represents women working as professionals in cities or in the agricultural sector in rural areas.

Her earrings are the gold moons of traditional bridal jewelry (Sudanese, like many Arabic speakers, often use moon-based metaphors to describe feminine beauty)

Her entire outfit is also a callback to the clothing worn by our mothers & grandmothers in the 60s, 70s, & 80s who dressed like this during while they marched the streets demonstrating against previous military dictatorships.

Sudanese everywhere are referring to female protestors as “Kandaka,” which is the title given to the Nubian queens of ancient Sudan whose gift to their descendents is a legacy of empowered women who fight hard for their country and their rights.”