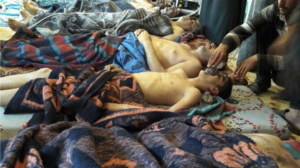 Last week, the US, UK, & France (all part of the US-coalition in Syria) proclaimed they are committed to holding the Syrian regime accountable for indiscriminately killing innocent men, women & children with chemical weapons. In comments on Twitter to mark the second anniversaries of Syrian chemical weapon attacks on Khan Sheikhoun & Douma in April 2017, the US State Department repeated its commitment to hold the Assad regime accountable for atrocities against the Syrian people by the use of chemical weapons.

Those proclamations must sound so stirring & heartfelt to the Syrian civilians of Raqqa who the US-coalition (including the UK & France) pummeled with white phosphorous in 2017; to the civilians of Mosul, Iraq who were buried in the rubble of US warplanes in 2016-2017; to the civilians of Afghanistan, subject for over 17 years to carpet bombing but especially after the US dropped the Mother of All Bombs in April 2017; to the people of Yemen who the US has been bombing since before the Arab Spring uprising in 2011; to Palestinians whose genocide is bankrolled by the US Pentagon for the past 70 years; to Somalis & Libyans & others subject to US war crimes.

When the US hands out human rights awards or condemns other regimes for war crimes, how can anyone repeat that like it meant something? There are tens of thousands of refugees penned up in concentration camps or stranded on the US southern border who testify to the utter criminality of the US government making it unable to distinguish human rights from war crimes. The US-coalition operation in Syria is not a “regime change operation” as simpleminded Assadists claim; it is part of the counterrevolution against the Syrian Arab Spring uprising. At no time, have US bombers pursued Syrian forces or attempted to deter them from bombing civilians. Under the guise of fighting ISIS, the US-coalition has killed thousands of Syrian men, women, & children, including with white phosphorous, & is as culpable in Syria as the Assad regime, Russia, Iran, & Hezbollah.

This photo is from Khan Sheikhoun Syrian chemical weapons attack on April 4, 2017.