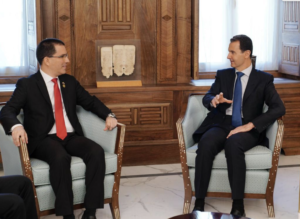 Jorge Arreaza, Venezuela’s Minister of Foreign Affairs, made a state visit to Syria on April 5th & 6th. While there, he laid a wreath at the Unknown Soldier monument paying homage to Syrian soldiers killed while slaughtering Syrians of the Arab Spring uprising. He tweeted this photo of himself with the butcher Assad along with the message: “Immensely honored to have been received by the President of the Syrian Arab Republic, brother Bashar Al-Assad. So much experience, wisdom and advice for resistance, victory and Peace. We transmitted the embrace in solidarity from President @NicolasMaduro. Long live Syria!”

Would those who claim they support the Syrian Arab Spring & oppose Assad but also promote the Maduro regime as a bastion of popular democracy care to explain how the Venezuelan government can stand for democracy in Venezuela & counterrevolution in Syria at the same time?