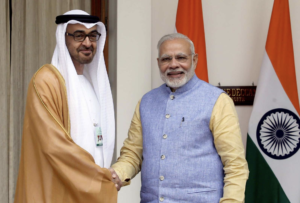 The United Arab Emirates (UAE) just awarded India’s Modi the Order of Zayed, its highest civilian award. Because of the UAE’s close alliance with Saudi Arabia & central role in the bombing of Yemen for the past five years & Modi’s role in genocide against Muslims, this could not possibly be a human rights award. It’s as discredited as the Nobel Peace Prize. Previous recipients of the Zayed include Sepp Blatter, the disgraced former president of FIFA now banned for six years for corruption; Al Khalifa, the king of Bahrain who brutally suppressed the Bahraini Arab Spring; Gurbanguly Berdimuhamedow, the dictator of Turkmenistan with a human rights rap sheet a mile long; Vladimir Putin, whose criminality needs no elaboration; Xi Jinping, the president of sweatshop nation China engaged in genocide against the Uyghur people; Salman bin Abdulaziz Al Saud, the Saudi king who assisted Al Khalifa in repressing the Bahraini Arab Spring, leader of the Saudi-coalition bombing Yemen to smithereens, & the father of MBS, who orchestrated the beheading & dismemberment of Khashoggi.

The award was given to our man Modi because he has increased Indian investments that profit the UAE & because of his role in strengthening counter-terrorism defense in the region. The cruel irony of a monarch engaged in bombing Yemen for five years giving a counter-terrorism award to a politician engaged in persecuting Muslims & shooting pellet guns at unarmed protesters in Kashmir is too much for the sane mind to grasp. Given the nature of the Zayed award, Modi more than deserves it to wipe his ass with.