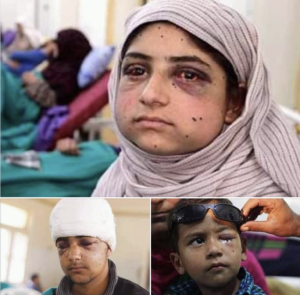 Pellet gun victims in Kashmir, many of whom were not involved in protests & many who are children: there was more political furor over a single suicide bomber attack than over the thousands who have been blinded, disfigured, disabled by pellet guns. There needs to be an international campaign against their use or they will spread like the use of water cannons against protesters.

According to the latest report on Pellet Gun Victims in the Kashmir Valley, 59.3% of the victims suffered from visual impairment of various degrees while 36.7% ending up with severe blindness.