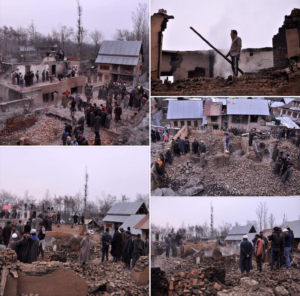 Kashmiri family homes reduced to rubble by Indian occupation forces: since Israeli occupation forces in Palestine use the same method of razing family homes & in fact entire villages, this must be a thought-out tactic of occupation. Perhaps it is one of the tactics taught to the Indian army by Israeli paramilitary forces who were contracted by India to train their forces in Kashmir.