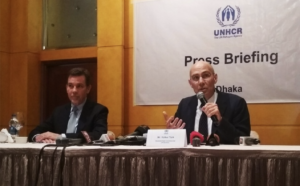 See these two spiffy dudes from UNHCR in their expensive suits? They held a press conference in Dhaka, Bangladesh yesterday to say they welcome the Bangladesh government’s “proactive steps to create an alternative settlement plan for Rohingyas.” By which they mean the concentration camps on Bhasan Char, an island which is under water most of the time & in the middle of nowhere. They did say they think it important that the relocation be on a voluntary basis. How many times & in how many ways do the Rohingya have to tell these guys that they have no intention of being sent to a living hellhole from which they cannot leave?

There’s a better alternative settlement plan for those Bhasan Char barracks. Send these two guys & their other well-heeled colleagues to spend a few weeks in the place shoveling sh–t against the tide & see how they’d like it.

The refugee crisis in Bangladesh is nothing to ridicule, given the miserable conditions the Rohingya are living under. But the solution is not to send them to hellholes which they cannot survive. The solution is to apply massive political pressure on the Burmese government to stop the genocide against the Rohingya people, allow them full human, democratic, & citizenship rights, & in the meanwhile demand other governments grant them asylum & traveling papers.

(Photo of these two idiots from BD News 24)