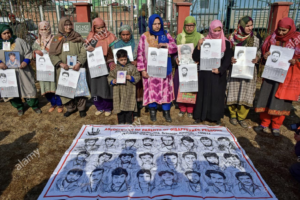 It’s such a moving tribute that so many are posting photos of those killed at Christchurch so that we know who it is we’ve lost. People around the world display collages of their beloved who were forcibly disappeared for decades after they were disappeared as an act of protest to demand justice. When Palestinians or Kashmiris post photos of their beloved disappeared or killed by occupation forces, it makes what they are going through very personal & meaningful to all of us. When my younger brother took his own life, all of us in the Samaritan support group used photo collages to help process our grief & still today I surround myself with photos of Paul because it helps to keep him near my heart. We all created a quilt for suicide prevention events with photos of our beloved.

Photographs play a role in grieving & in the fight for justice so thank you to those posting photos of those who have died in Palestine, Kashmir, Christchurch, & elsewhere. It’s a tribute to the role they have played in the struggle against war, occupation, persecution, genocide.

(Photo is protest of Association of Parents of Disappeared Persons January 2019, from Alamy website)