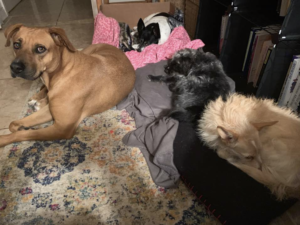 The big girl is Bianca who has a bum leg from when she broke it while abandoned. It’s not repairable & bothers her some days worse than others. The little ones love her because she roughhouses with them & swats them with the bum leg but never hurts them. She has a big heart except for feral cats since she would be a lion killer in Africa where Rhodesian Ridgebacks originate.

The black & white boy is Maxi who is about 12 years old & did not ever go indoors for eight years. The little black furball is Rocky who just learned to bark & the little beige furball is Bellissima who does the mean girl routine at the dog park but is a mama’s girl at home.

The four others are in my lap pinning me down.