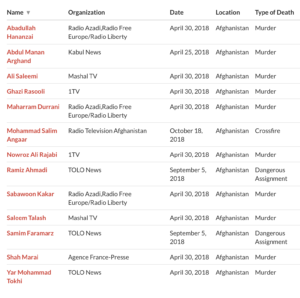 According to investigations by the Committee to Protect Journalists, at least 13 journalists were killed in relation to their work in Afghanistan in 2018, making it the deadliest country for journalists worldwide. When I said in a post yesterday that there was no war reporting by journalists in Afghanistan, I was talking through my hat in a most deplorable way. Whatever these reporters were recording was not being reported, at least in US & European media. They were not murdered for writing propaganda for the Afghan government or to cover for the US war, as embedded reporters do.

This is a list of the journalist’s names, media associations, & data on their deaths, mostly by murder. We should take a moment to honor their lives lost in trying to inform us about the 18-year US-NATO occupation of Afghanistan. May they Rest In Peace.