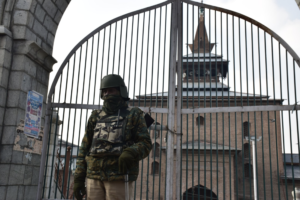 One of the many parallels between the Palestinian & Kashmiri struggles against colonialism & occupation is how Israel & India lay siege to Muslim places of worship. The Jamia Masjid in Srinagar sustains the same kinds of aggression as the al Aqsa Mosque in Jerusalem: lockouts of worshippers, long months of bans on Friday prayers along with harassment, confrontations & provocations by Indian troops near the premises. I once investigated the issue & despite inadequate information found that other mosques in Kashmir have been vandalized & torched by Indian occupying forces. These assaults on Muslim religious institutions are part of occupation & fighting for freedom of religion is part of the struggle against it.

Photo is lockdown of Jamia Masjid in September 2018.