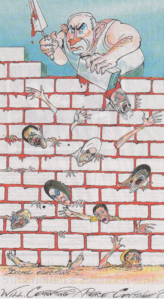 Apparently condolences for massacres come cheap these days. Even Netanyahu chimed in on Christchurch, saying, “Israel mourns the wanton murder of innocent worshippers in Christchurch & condemns the brazen act of terror.” He said that yesterday while Israeli snipers were shooting down unarmed protesters, journalists, medics, children at the Great Return March in Gaza & during a week of airstrikes over Gaza. According to a UN agency, just in 2018 almost 300 Palestinians were killed & 29,000 were injured in the West Bank & Gaza by Israeli occupying forces & settlers. According to the Gaza health ministry, over 6,000 Palestinians have been injured by live ammo during the Great Return Marches, 14,000 people were hospitalized for injuries sustained during the protests & over 12,000 were treated at field clinics.

When Modi, Netanyahu, Trump offer condolences for acts of terrorism against Muslims, sarcasm dies another thousand deaths. What’s next in this festival of sarcasm? Condolences from Assad, Suu Kyi, & Duterte? God save us.

(Caricature of Netanyahu & the apartheid wall by Gerald Scarfe, 2013)