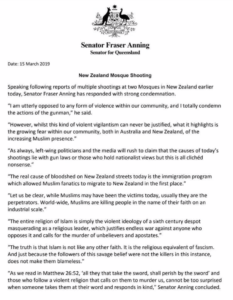 An Australian politician’s statement on the mosque massacre which shows the scale of hatred Muslims are up against & why “Islamophobia” is such an inadequate term to describe it. Either we rise up as one & drive this movement back or fascist forces will attempt to devour humanity, as we see so clearly in Syria, Burma, Palestine, Kashmir, & elsewhere.