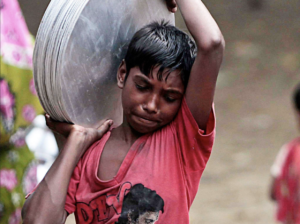 Someone always takes umbrage at my criticisms of the Bangladeshi government for their plans to deport Rohingya refugees back to Burma or to the uninhabitable island in the middle of nowhere. They claim Bangladesh is a poor country unable to sustain the number of refugees. Partially that may be true. But then Bangladesh should campaign for other countries to impose economic, political, & military sanctions on Burma & to accept Rohingya refugees for asylum rather than try to force them into concentration camps in Burma or Bhasan Char. It should allow refugees to work, attend school, be integrated into Bangladeshi society.

But there’s another thing: Bangladeshi workers are impoverished by their government’s sweatshop economic policies & by its promotion of child labor in order to attract sweatshops. If some think I’m critical of the government for its refugee policies, they should read my excoriations over its refusal to impose safety policies on garment sweatshops or prosecute sweatshop owners after dozens of fires & building collapses; over its refusal to compensate sweatshop workers who have been injured in fires or families who have lost loved ones in fires or catastrophes like the collapse of Rana Plaza in 2013; over its promotion of child labor in dangerous, backbreaking jobs.

Several years ago, the central bank of Bangladesh reported that the number of Bangladeshi billionaires had tripled due to child labor & sweatshop policies. That doesn’t include the proliferation of millionaires raking it in because of such policies. This photo is a Bangladeshi boy working at an aluminum factory in Dhaka. The health hazards of working with aluminum sentence this small boy to a short life with debilitating health problems. In 2010, Bangladesh adopted the National Child Labor Elimination Policy to eradicate all forms of child labor by 2015 but according to the International Labor Organization there are still over 3.2 million child laborers in Bangladesh. Before the Bangladeshi government can cry poor-mouth, it will have to enforce its own laws & eliminate child labor, allow labor unions, & end sweatshop economics.