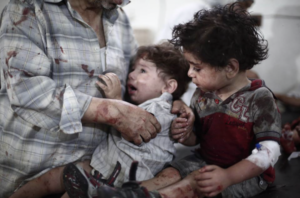 UNICEF reports that 2018 was the deadliest year for Syrian children since the start of the Syrian Arab Spring uprising in 2011. The highest number of children were killed in a single year, mostly through bombing attacks on homes, schools, & health facilities. The situation will only worsen since there is an intensification of bombing in Idlib, because of unexploded ordnance, because of limited access to food, water, shelter, healthcare, & because of worsening conditions in the refugee camps. Assadists continue to call this liberation.

No support to the Assad dictatorship! All foreign military forces out of Syria!