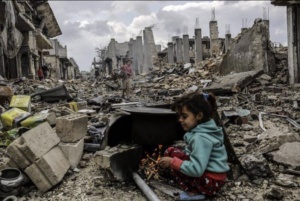 Armageddon in Syria (or what Assadists & the corrupted antiwar movement call “liberation”): the Syrian Network for Human Rights has documented 223,161 civilian deaths in Syria since March 2011 by the Assad regime & its Russian & Iranian allies. The death toll is of course considerably higher & does not account for US-coalition bombing deaths under the guise of hunting down ISIS. The purpose all along for all these military forces has been to destroy every vestige of the Syrian Arab Spring uprising.