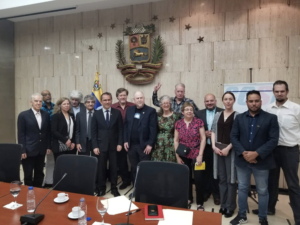 The US Peace Council, a Stalinist & Assadist organization, has organized a delegation to Venezuela to meet with Foreign Minister Jorge Arreaza in a replay of the delegation they took to Syria to meet with Assad in July 2016. The Venezuelan delegation included some of the same people as went to Syria but broadened to include Assadist Ajamu Baraka & other activists from the corrupted US antiwar movement who also support the Assad regime. Fascist Eva Bartlett, described as a progressive journalist rather than an Assad propagandist, was part of the delegation. In Syria, Stalinism found its natural habitat in fascism.

Even if political people have made colossal mistakes in the past, it’s possible to work with them when they’re doing the right thing. This is not an instance of that. They went to Syria to drum up support for the Assad dictatorship & to undermine support for the Syrian Arab Spring uprising. They successfully disoriented the international antiwar movement so that it did not mobilize against Syrian & Russian bombing, Iranian military intervention, or even US military intervention in Syria. They persuaded thousands of activists around the world that the Syrian Arab Spring was ‘Wahhabi jihadi terrorism’ & not a popular uprising against dictatorship. Their intervention into Venezuelan politics is not as a peace delegation but under the tiresome rubric of “regime change operation” to drum up support for the Maduro regime & demonize the hundreds of thousands of Venezuelans protesting his austerity policies. They will present eye-witness accounts from their government-sponsored tour of the barrios as proof there is no popular resistance to Maduro & that which exists is US-sponsored. Venezuela may become the final nail in the coffin for the antiwar movement which cannot distinguish between repressive, capitalist regimes & the just demands of exploited working people. Or if can distinguish, chooses to side with the regime against working people.

Venezuela remained a capitalist country even after the so-called Bolivarian Revolution. Its programs to advance the working poor, though important, were more analogous to the poverty programs for Black workers coming out of the US Civil Rights Movement than to a social revolution against systemic inequality. The leaders of Venezuela have created a distorted economy based in oil & have shifted their axis from the US-IMF orbit to Russian & Chinese aid. That is a fundamental aspect of the austerity Venezuelans are protesting even though all of the economic misery is being placed on US sanctions by pro-regime apologists.

They will not be able to rebuild the corrupted antiwar movement on a basis of support for the Maduro regime but only on principled opposition to US military intervention which places political emphasis on the Venezuelan people & not on support for a corrupt capitalist regime.