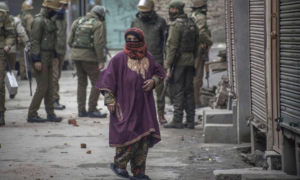 If it weren’t for Kashmiri activists on social media, this halfwitted article in the Guardian would be what the rest of us are being fed on the Kashmiri freedom struggle against occupation & colonialism: “Standoff in Kashmir: ‘Our last hope is that a war will sort this once & for all’.” The two writers, one a Kashmiri & the other the South Asia correspondent for the Guardian based in Delhi, found the only two guys in Kashmir who think in their despair that war between India & Pakistan will resolve the Kashmiri conflict with India.

This photo from the article was captioned: “A Kashmiri Muslim woman looks on as Indian government forces stand guard after clashes with separatist protesters.” Now doesn’t that just clear things up about what the war mongering in India is all about? A more coherent & honest caption would say “Some of the 700,000 Indian occupying soldiers in Kashmir are hassling pedestrians while they wait for the next hunt to kill operation where they will terrorize civilians, shoot up their neighborhoods with pellet guns, & raze homes under the guise of hunting down terrorists.” This is a shameful article & outside of a brief synopsis of Kashmiri history & a few sentences about the repression in Kashmir after the Pulwama incident, it is worthless.