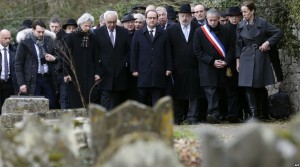 This is French president Francois Hollande in Sarre-Union in northeast France, where 300 graves in a Jewish cemetery were vandalized & desecrated. Five adolescents were arrested for the crime. If the kids had Arabic ancestry & weren’t just thuggish, this would be headline news.

After the Charlie Hebdo (CH) incident, considerable fear-mongering has been whipped up in Europe about the rise in antisemitic attacks, with Netanyahu leading the chorus to encourage Jews to flee to Palestine. In fact, the greatest number of assaults after CH are against Muslims, with 147 assaults reported in France alone & mass Muslim-hating rallies in other countries like Germany. In the week following CH, 26 mosques were attacked throughout France with firebombs and/or grenades. Muslim women have been particularly targeted with spitting, things hurled at them on the street, & physical & verbal abuse, including being taunted as “Muslim whore,” & “Muslim bitch.”

Despite sensationalizing & fear-mongering about rising antisemitism & downplaying the rise of Islamophobia, incidents of antisemitic attacks are increasing in Europe & have been for nearly 20 years, with verbal abuse, physical assaults, vandalism & fire bombings of synagogues, schools, & cemeteries.

Zionists, European regimes, & in particular Israel attempt to pin the increasing attacks against Jews on Muslim terrorists. In fact, if you look at the statistics from Europol, the security agency, that vilification doesn’t shake out. According to their annual reports, most of the acts against both Muslims & Jews are carried out by thugs from far-right nationalist groups. The incidence of Muslim so-called “terrorist” attacks is less than one percent of total incidents.
Israel & its Zionist supporters have long attempted to link antisemitism to anti-Zionism, although a growing number of religious & secular Jews are active supporters of Palestine & oppose Zionism as a racist, right-wing, nationalist ideology. It must be said that when Palestinian supporters associate themselves with the likes of David Duke & David Ickes, both ferociously hateful toward Jews, it does not help make that necessary political distinction.

It doesn’t matter how many times Frankie Hollande shows up to showcase an antisemitic incident or ignores the fire bombing of a mosque. He cannot obfuscate the fact that he is conducting vicious racist campaigns against Roma in France & with his right-wing policies has emboldened nationalist thugs to attack Jews & Muslims. Truth of the matter is, the natural allies of Jews being attacked are supporters of Palestine, not vicious war mongers like Hollande, Obama, or Cameron.

The original promise (albeit, a false one) of Zionism was to create a promised land where Jews would be safe from persecution–because Zionists were not willing to stand against the colonialism of European & US regimes that was laying waste to so much of humanity. By adopting rather than repudiating the methods of colonial plunder & expropriation, they have not created a safe haven for Jews in Israel. To protect their promised land gained through racism, terrorism, & colonialism, Israel has to be armed to the teeth & on permanent war footing.

Israel is neoliberalism’s patsy in the Middle East. The US & European regimes don’t give a rat’s ass about protecting Jews from pogroms & persecution. They are using Jews as a battering ram & an outpost to protect their economic & political control of the region. And the ugliest part of all that, is that Israel’s leaders know that full well.

Zionism doesn’t make it easy to stand with Jews against violence but that is what all supporters of justice, especially Palestinian supporters, must do without batting an eyelash of discomfort. We are the ones who stand against tyranny & injustice, xenophobia & every expression of racism & social hatred. We are the ones who stand with our Jewish & Muslim brothers & sisters under attack.

(Photo of Frankie Hollande & others by AFP)