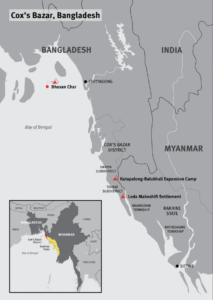 The Bangladeshi government is proceeding with its deranged plan to deport up to 103,000 Rohingya refugees to the island of Bhasan Char. The island only emerged from the sea about 20 years ago & is one of many shifting, unstable islands called floating islands in the Bay of Bengal. British & Chinese engineers are working with the Bangladeshi navy to turn the remote island (30 km/21 mi from the mainland) into a concentration camp even though it is uninhabitable. It is frequently flooded by cyclones & during a normal high tide is under three to four feet of water. During the full moon & new moon some areas are under four to eight feet of water.

The Sheikh Hasina government says Rohingya refugees will not be forcibly deported to Bhasan Char but odds are infinitesimal that they will find anyone to volunteer being sent to certain death. One of Hasina’s advisers told Reuters that once on Bhasan Char they will not be able to leave unless it is back to the killing fields of Burma or for asylum to a third country.

All pressure must be put on the Bangladeshi government to abandon this insane plan & to instead send the politicians & engineers who devised this plan to spend all eternity on Bhasan Char. Or at least until the first monsoon takes them out.