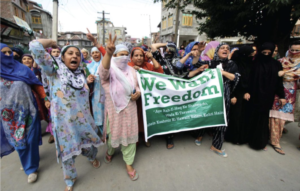 It appears as if India will not imminently go to war against Pakistan. But the strident war mongering by its media & politicians has served its purpose to increase nationalist violence against Kashmiris working & studying in India & to legitimize a crackdown on activists in Kashmir where many have been arrested & will likely be tortured & incarcerated. It has also shown the weakness of antiwar mobilization in India & solidarity activism elsewhere.

The Kashmiri struggle is important for all humankind in the same way as the Palestinian, Uyghur, & Rohingya struggles: because they have not bent the knee to oppression & continue against all odds to end the legacy of colonialism & build societies suitable for human beings to live & love in. Just as the US Civil Rights Movement inspired freedom struggles around the world, a victory of these movements has the power to change the world for all of suffering humanity. That’s why their struggles to build political power against colonialism must be actively supported.

(Photo is Kashmiri women protesting in July 2016 during an uprising against the occupation, from Twitter)