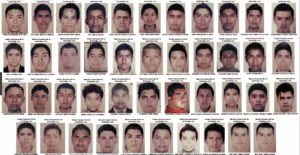 It was September 26, 2014 that 43 young Mexican students from the Ayotzinapa Rural Teachers’ College near Iguala, Mexico were preparing for a trip to Mexico City to protest & commemorate the October 1968 Tlatelolco massacre of students by army & police. Their bus was stopped & they were abducted & forcibly disappeared under the murderous & corrupt regime of former president Enrique Pena Nieto. Nieto took a $100 million bribe from the $250 million he attempted to squeeze from El Chapo. The families of the students have never ceased campaigning for an investigation & prosecution of those responsible. In their speaking tours, including through the US, they have provided credible evidence that the Mexican Army was directly involved.

It’s not known if the young men were murdered outright or if they are being held in secret prisons. But in the search for their remains, at least 130 other disappeared bodies have been found just in the area of Iguala. These are not only related to the reign of terror by the drug cartels but to the military occupation of Mexico by its own troops which began under the regime of president Felipe Calderón, also implicated for taking bribes from drug cartels. Since 2006, the death statistics are well over 150,000 people who had no relationship to the drug trade. Many were Central American refugees who were tortured, murdered, & buried in mass graves.

Now the new president Andres Manuel Lopez Obrador who was elected last year has set up a commission to investigate the disappearances of the Ayotzinapa students, once again as a result of campaigning by their parents & families. Unfortunately, he is also implicated in taking bribes from El Chapo. Any genuine investigation would place him at odds with the Mexican Army so it remains to be seen what kind of investigation it will be. But the families continue to monitor the situation & relentlessly push for justice for their sons.

(Photo is collage of Ayotzinapa 43 from Latina Lista)