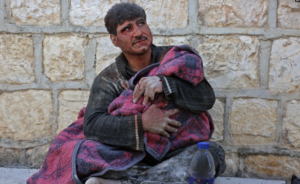 A Syrian man cries over the body of his young daughter who was killed by Syrian regime bombing & shelling in the town of Khan Sheikhun in Idlib province. The civilian death toll in Idlib since February 9th is now at least 42 according to the Syrian Observatory for Human Rights. Putin, who was holding a summit in Russia with Turkey’s Erdoğan & Iranian president Rouhani, said, “We should not put up with the presence of terrorist groups in Idlib.” Perhaps Putin could explain to us which terrorist group this little girl belonged to.

And the corrupted international antiwar movement dares call Syrian & Russian bombing of civilians a freedom struggle against a ‘regime change operation’. The only principled stand is to demand the immediate, unconditional withdrawal of all foreign military forces from Syria. Any defense of the bombing of civilians is complicity in war crimes & in the crushing of the Syrian Arab Spring uprising.